Paula "Weather Vane" Hayes was a former news assistant who gained the ability to control or mentally affect the weather from the meteor strike.

Weathervane's main attacks are lightning and she is also capable of creating cloud creatures. First, she used her powers to get in as the weather reporter, but when she is struck by the very lightning she predicted, she turned evil and her powers were vastly increased. She has a great dislike for Acmetropolis' most famous weather girl and her boss, Misty Breeze, and attempted to destroy the city unless Misty Breeze was delivered to her. She transformed into a huge Storm Dragon and when the Storm Dragon was destroyed, it was presumed that she escaped.

In the episode "Acmegeddon Part I", Weather Vane appeared again, this time locked in a special holding chamber which she could not escape from. In this episode, she was freed by Optimatus along with Drake Sypher, Mastermind, and Massive. Together, the indebted villains aided Optimatus in his plan to destroy the Loonatics.

However, when it was revealed that Optimatus was actually going to destroy Acmetropolis, Weather Vane and the other villains tried and failed to stop him. She and Massive together were not only able to hold their ground, but even injure Optimatus; they were eventually overpowered, however. She is last seen at the end of "A Creep in the Deep" as one of the imprisoned super villains.

Atmospheric Manipulation - She has the powerful ability to manipulate atmospheric phenomena, making her a very dangerous villain. Weathervane can summon storms, command lightning, wind, and fog, cover herself in an energy shield, fly, create creatures out of clouds, and even a Storm Dragon form. 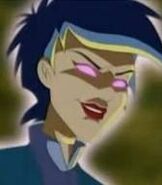