Time After Time is the tenth episode of the first season.

The episode begins with a panicking news reporter broadcasting the news of the human operated military robot, the Trollbot 9000, stolen from the Acmetropolis Weapons Laboratory. The Loonatics valiantly attempt to stop the robot in it's tracks by blowing up one of the propeller fans on one of it's arms, in hopes that Tech could neutralize it by using the Metallo Converter from their headquarters.

Despite their efforts (with the fact that Tech turns to ashes after Rev already reversed the Metallo Converter with the Turbo Reverse Modulator and that the Trollbot 9000 was practically invincible against any of the Loonatic's attacks), they failed to stop the culprit's destruction of the headquarters.

Just when Ace was about to meet his fate by being trodden on by the Trollbot 9000, he wakes up in bed believing that the earlier events were nothing more than a dream. He enters the kitchen where the other Loonatics are making breakfast when Zadavia informs the team that someone has broken into the Acmetropolis Weapons Laboratory in an attempt to steal the Trollbot 9000, "the most powerful fighting machine ever created", the same one that wrecked havoc at the beginning of the episode.

As the Loonatics set off to get ready for the mission, Danger Duck receives a call from Dr. Fidel Chroniker, who tells him that his grandson is out of control. Danger Duck dismisses the call telling him that they're superheroes and that he should discipline his grandson himself. Chroniker says in frustration, "Must we go through this again?", before the scene shifts to the weapons laboratory where a young man named Arthur Chroniker (also known as Time Skip) breaches security and explains that the military stole the design for the Trollbot 9000, intending to claim back what was his.

The events from the beginning of the episode repeats (with the addition of Ace feeling he's been through the previous events before) up until the point where Time Skip takes control of the machine once again. It's only then that Tech figures out that Time Skip is manipulating time to stay one step ahead of them and they need to contact Dr. Fidel Chroniker about the deja vous the Loonatics experienced.

Ace, Tech and Danger Duck visit Fidel Chroniker and are told that he had been trying to contact them and resetting the day to it's beginning for the last five days. Time Skip (who's real name is later revealed as Arthur Chroniker) irradiated himself with the power to manipulate time, enabling him to leap moments ahead of everyone else. Fidel Chroniker shows them how his grandson manages to succeed every time and suggests they set a time trap for him.

The day is reset once more but this time Ace receives a letter from himself in the future, as well as plans of Dr. Fidel Chroniker's time displacer. Everyone experiences a brief mental flash forward from the events of the future which ended in failure after Zadavia informs them of the attempted theft and immediately ready themselves for action.

Later on, Time Skip manages to reach the room where the Trollbot 9000 is located without meeting any guards or setting off any alarms. When he arrives, Lexi, Slam, and Danger Duck (who have already situated themselves inside the Trollbot 9000) attempt to lure Time Skip (who takes control of another ship) towards their headquarters, where Tech, Ace, and Rev wait for them so they can vaporize the ship and set the time trap. They are successful in imprisoning Time Skip and Fidel Chroniker says that he will neutralize Time Skip's time manipulation powers before the authorities take him to prison.

Tech: "Hold that thought." (groans in pain and disintegrates)

Zadavia: "The Trollbot 9000 has been stolen by a villain called 'Time Skip'."

Ace: Huh, strange.
Lexi: Ace, toast is not strange. Unless Duck makes it. Then, watch out!

Tech: [after getting blown up] You already reversed the reverse modulator, didn't you?
Rev: Just saving you time. Isn't that what you wanted?
Tech: Hold... that... thought. [disintegrates]

Dr. Fidel Chroniker: I've been trying to call you for the last five days.

Ace: Are you thinkin' what I'm thinkin'?
Lexi: I was already thinking it yesterday.

Lexi: And I thought this day would never end.
Ace: And I didn't know you were gonna say that.

Duck: [video phone rings and Duck answers it] Hello. Make it snappy, gramps. We're off to save the city!
Dr. Fidel Chroniker: My name is Dr. Fidel Chroniker and my grandson is totally out of control.
Duck: And this is our problem how? We're superheroes, send junior to bed without his video games and let us do our job. 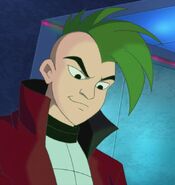