A meteor strikes the city-planet of Acmetropolis during the year 2772, knocking it completely off its original axis. However, instead of destroying the planet, the impact of the meteor and its resultant shock wave gives off supernatural cosmic energies that give some inhabitants superpowers while incapacitating others.

A mysterious and powerful woman called Zadavia calls upon six of the affected residents to form a team of superheroes. She becomes their supervisor, dispatching them for the purpose of combating any and all threats to Acmetropolis and its citizens.

The newly formed team are the Loonatics, who they reside on the 134th floor of a large tower.

Ace Bunny is clever, savvy, and a born leader, who wears his uniform with yellow accents. Ace is the team's leader. He fights in close proximity to his enemies, using his martial arts skills more than his laser vision. An adept martial artist and swords-hare, Ace's sword, as revealed in the second season, is a weapon from the planet Freleng (link to Friz Freleng) called the Guardian Strike Sword. Ace has a Brooklyn/New York accent and a smart mouth. Ace loves to toy with his opponents. However, he does so less in cases where his opponents could be a potential threat to him and his team.

Lexi Bunny is the beautiful second-in-command of the Loonatics. Lexi possesses expert eavesdropping skills. She is the only female team member and has pink on her uniform. She does seem to care deeply about Ace, as evidenced by how she reacted to to the possibility of him being dead in Acmegeddon Part II, when she hugged him, ignoring the fact that Rev could have been dead. Aside from that, however, whatever concern she may have for his safety, she seems to keep it well hidden.

Danger Duck (usually referred to as just 'Duck') is the spotlight hungry, egoistical member of the Loonatics. He wears an orange colored costume. His voice sounds similar to Daffy Duck, but with a lessened version of Daffy's lisp. Duck longs to lead the Loonatics, though he does seem to accept/tolerate Ace's impressive leadership.

Rev Runner is a member of the Loonatics. Rev is quite intelligent, being the only one capable of understanding Tech's highly academic speech, though he is not as smart as Tech. Rev is actually quite good friends with Tech, Ralph and Harriet, have. It has been brought into question which of the two is better at inventing, however, Tech proved to be the better inventor when Rev begged him to help complete the Robo Amigo. Rev has been shown to be irritating to his teammates and even the villains due to talking constantly.

Tech E. Coyote, is incredibly intelligent. He creates his own gadgets for the Loonatics to use. Before gaining his powers, Tech was a student at the Acmetropolis University. As a member of the Loonatics, Tech acts as the team's technician, being the source of their various crime fighting gadgets and vehicles, typically as the situation requires.

Slam Tasmanian is the group's muscle-bound heavyweight and wears a purple uniform. Taz he can spin. He also talks like Taz. His speech sounds like simple grunting of English, but is implied to be dialogue the audience is not meant to understand. The other Loonatics will sometimes mention what Slam said, effectively translating anything important. In the second season, he speaks better English, but still does not seem fluent in the language.

Zadavia is The Loonatics' beautiful yet mysterious supervisor and possible benefactor. She often appears to them in a flashing, hologram-like form, though she started to appear in person starting in season two. When appearing in her non-physical form, she usually contacts them to tell them of a recent threat to Acmetropolis. After the Loonatics have completed their mission, she follows up with congratulations, advice, commentary, and if necessary, reprove a member or members (usually Danger Duck).

Pre-production stage names for some of the series' characters were: 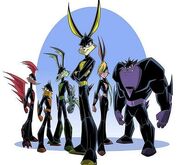 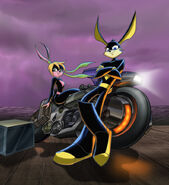 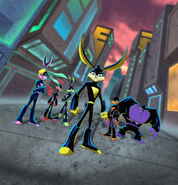