The Comet Cometh is the sixth episode of the first season.

Acmetropolis is celebrating the Loonatics on the one-year anniversary of the meteor strike, when the sky is suddenly filled with pieces of rock falling from the stars. The Loonatics then are on the move to protect the citizens of Acmetropolis. After all the debris is reduced to rubble an investigation by Tech reveals that another meteor is headed straight for Acmetropolis, only this one is 500 times larger than the one that gave the Loonatics their powers one year prior.

Duck comments that he won't like a world where everyone has superpowers, but Lexi tells him that when this meteor hits there will be nobody. Zadavia confirms this and tells the Loonatics that they need to stop the meteor before it strikes the planet.

As the team prepares for the intercept mission, the lives about each member of the Loonatics and what they were doing before the meteor struck are shown. Ace was martial arts stunt double who believed that he could do more than fill the role of an ordinary stunt double but was under tight control of the director. Lexi was a student at Acme University trying out for the cheerleading squad. Though she had extraordinary skill in gymnastics and agility, the head cheerleader was jealous of her and didn't want her to get the spot on the team. Duck was a pool boy, angry at the fact most of his day consisted of getting dirty diapers out of the pool. Slam was a professional wrestler, disapointed by the fact that the matches were staged. Tech was a student at the Acme Tech Institute, although his need for perfection often caused his inventions to backfire. Rev was a pizza delivery boy who was always late, despite his invention of rocket roller-skates.

In space, the Loonatics suit up to take out the meteor. When they fail to destroy the meteor, they land on it to plant charges and destroy it from the inside. Though the Loonatics are eventually successful in destroying the meteor, an unknown figure declares that he will destroy Acmetropolis.

Duck: Mayor, your life has been saved by Danger Duck!
Mayor: [the branch beneath The Mayor breaks and she falls.] Gee, tha-a-a-anks! [she hits the ground with a thud.]
Duck: Well, kind of.

Duck: [scoops up a diaper out of the pool] Ugh, another treasure from the deep. 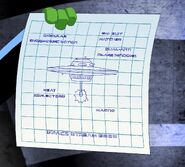 Blueprint of the "Space Stream 8000", text on that was written with the "7th Service" font. 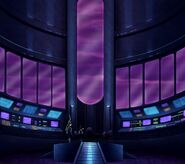 14:39
Community content is available under CC-BY-SA unless otherwise noted.
Advertisement