Tech E. Coyote is one of the main characters of Loonatics Unleashed. He is the team's technician member (hence his name) and has superintelligence. Tech relies on gadgets with the distinctive difference that Tech makes them himself, and that they actually work the way he built them. Tech does not have an English accent. He wears a black and light green uniform with a different buttons to his bodysuit, lime eyes (with yellow eyeball if without his uniform), and broken coyote ears..

Tech is a very warm-hearted individual, though he has a tendency to be somewhat overprotective when it comes to his inventions (or "babies" as he refers to them).

Before gaining his powers, Tech was a student at Acmetropolis University. Sometime before the impact, he tutored the young Mallory Casey (who later became Mallory Mastermind) but discovered her device, which was designed to transfer the intelligence of the various professors of the university to her. Fortunately, Tech disabled her machine before it did any damage and called for the police to take her away.

Seconds before the meteor impacted the city, Tech demonstrated another invention to one of his mentors, but was wrongfully thrown out of the university when the impatient teacher accidentally activated a self-destruct system Tech installed for "extra credit."

As a member of the Loonatics, Tech acts as the team's source of various crime fighting gadgets and vehicles, typically as the situation requires. The meteor's energy gifted him with magnetic manipulation powers as well as the ability to regenerate his body after disintegration or serious injury (a reference to his ancestor's tendency to suffer grueling injuries yet rapidly recover). Tech also displays above average intelligence but appeared to be as accident-prone during flashbacks to his college days. Since the meteor strike, his intelligence seems to have increased, as his inventions (nearly) always work.

Ace and Tech are known to make most of the plans for the team and are usually on the same page when it comes to ideas. Ace also shows appreciation for all of the inventions that Tech makes.

Rev is a good friend with Tech, despite the rivalry between coyotes and roadrunners due to their ancestors. While Rev is not as intelligent as Tech, he is the only one capable of understanding Tech's highly academic speech, and the two are usually seen talking and working on inventions together. Tech sometimes gets annoyed by Rev when he won't stop talking.

Mallory and him are both classmates during their career as a student at Acmetropolis University. However, he discovered her device, which was designed to transfer the intelligence of the various professors of the university to her. Fortunately, Tech disabled her machine before it did any damage and called for the police to take her away.

Tech, as a master inventor, has created a wide variety of tools to assist the Loonatics in their dangerous occupation of superhero crime-fighters. The team mostly refers to these as the "toys" while Tech, taking great pride in his work, calls them "precision handcrafted alloy instruments", or his "babies".

For a complete list of equipment used in the show, see Equipment.

The Retrofire Master Blaster looks like a miniature frisbee at a first glance. The Loonatics only have to squeeze it twice, and the "frisbee" transforms into an arm-mounted cannon that has a special "Thaw" mode, which was originally intended for the sole purpose of melting the giant iceberg seen in "Loonatics on Ice". However, when it was used, it had no effect whatsoever.

A motorcycle that can transform into a flight-capable vehicle.

The Exo-Vac 2400X, deemed by Tech to be the "Ultimate Urban Vacuum", was constructed to extract all the Fuz-Zs in Acmetropolis when the Loonatics learned that the Fuz-Zs would transform into monsters whenever they ate chocolate. When Lexi and Danger were caught by Professor Zane, the rest of the Loonatics dropped off the Fuz-Zs at HQ and initiated the "Turbo Vac-Jet Mode" of the vehicle to speed to Dare's lair to rescue their captured comrades.

When the Loonatics ventured into the Zeppelin housing the City of Darkness to rescue Tech, who was at the time brainwashed by Black Velvet, Ace brought along the Ninjizer 500, which is a large, lightweight cannon powerful enough to cut through steel walls with its "Beam Mode." It could also shoot nunchucks and shurikens, which could have been intended to reflect the martial-arts expertise of Ace Bunny as well as the weapon's namesake. Like the Retrofire Master Blaster, the Ninjizer 500 had a compact mode which enabled it to fold into a small, metallic block for ease of transportation.

The Grapple Gun was only use once by Ace and Tech to pull themselves and their comrades out of Weathervane's tornadoes. It has the standard design of a pistol except with an open, rectangular front end for housing and firing the hook and a cylindrical section on the rear where the high-tension wire is reeled in. Instead of utilizing a grappling hook or a quarrel, the Grapple Gun uses a mechanical claw with two flukes. Though the claw has enough torque to dig into concrete, it can be applied gently in order to haul in living things.

The Port-a-Lab appeared only briefly as Tech used it to design a bomb on a volcanic island in order to trigger and explosion that could evaporate Weather Vane's draconic cloud manifestation. It was destroyed in the resulting lava flow, much to Tech's despair.

A large, subterranean vehicle that can drill through any kind of rock.

The Space Stream was built by Tech to get to Optimatus' second meteor in The Comet Cometh". It is built like a flying saucer similar to the props used in 20th century sci-fi movies, hence Danger's comment, "A little retro, isn't it?" and his referring to the Space Stream as a "flying dinner plate." Despite the prominence of space in the latter half of the series, the destruction of the second meteor was the Loonatics' first mission out in space and the Space Stream 8000 was a milestone in Tech's designs, though it was fitted as more of an attack platform and was thus replaced for long distance travel by Optimatus' ship in the second season.

The ship has a built-in Laser Amplifier, labeled as the Magno in the blue prints, that increases Ace's laser vision power to well over a billion times. However, when it was used, it only peeled off a layer of atmospheric dust from its target, the second meteor. The hatches from which the Intercosmic Space Suits were deployed were referred to the MIO Hatches in the schematic. The schematic of the Space Stream also mentioned other specs that were otherwise not mentioned, such as its propulsion system utilizing Circular Gyroscopic Motion, the Dual Anti-Glare Windows, and Heat Deflector.

These suits were a very simple design consisting of a thin membrane of durable, transparent material fitted completely over one's body. It is accompanied by a metallic object strapped to each Loonatics' back, probably the supply of oxygen and a cooling system for the inside of the suit. They were designed with the sole intent of keeping the Loonatics' bodies from imploding, or rather to prevent ebullism in their bodies and their lungs from collapsing in the vacuum of space.

The Gluco-Gel 9000 was designed by Tech to encase targets in a cube of gel. He first used it when he was being transformed into a Galactic Oddity by shooting the DNA Scrambler, thus destroying it. It was then used for its intended purpose following the battle with the Ringmaster Oddity by encasing the fleeing Ringmaster and Otto the Odd in gel cubes. This weapon was used quite often to restrain a number of other villains.

The DNA De-Scrambler was built to counteract the effects of Otto's Sonic DNA Scrambler, returning anything that was affected by the latter to normal form. Tech first used it on the transformed children, then himself and the other Loonatics, and finally Zadavia. It was destroyed during the battle with the Ringmaster Oddity after one of its tentacles crushed it.

The Exosuits are nano-bionic armored suits that were probably first created by Tech to replace the flimsy design behind the Intercosmic Space Suits, but when all the Loonatics' powers had been stolen by Sypher, Tech redesigned the suits to replicate and deflect their individual powers. Once their powers were back in their possession, the additions made were no longer needed and removed upon their redesign.

Ace's Exosuit had laser goggles, Lexi's Exosuit had a supersonic scream to counter Sypher's ultra-sensitive hearing, Danger's Exosuit had "jellybeans" that randomly changed their composition when activated (when one hit Sypher's face, it turned into tar), Tech's suit had electromagnetic palms, Rev's suit had speed accelerator technology legs and wings, and Slam's suit had circular jets so he could once again spin into a Tasmanian Tornado.

A mounted cannon meant to disintegrate metals. It was used in an attempt to destroy the Trolbot 9000 and later used to shoot down a jet fighter that Time Skip had hijacked from the Acmetropolis military weapons lab.

A devices that can increase or decrease the size of any object.

A device that can alter the phases of matter between their gaseous, liquid, and solid forms.

A heavily armed weapons system with ludicrous amounts of automated artillery. Tech designed and programmed the deadly apparatus to defend the facility holding the Actinoid Curium 247 from intruders, namely Stoney and Bugsy.

Mostly know as just the Cosmic Guitar, it was a musical weapon designed by Tech at the demand of Boötes Belinda, and by extension, Rupes Oberon, to exchange for the release of Zadavia after she was captured.

A collapsible shield-like tool meant to bounce the destructive soundwaves of the Def Watt Rubber Ball Band right back at them.

"Excuse me, chief. They're not toys. They're precision, handcrafted, alloy instruments."- Loonatics on Ice 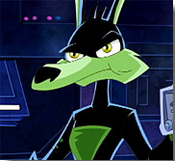