Sylth Vester is a bad guy. Similar to Queen Grannicus and the Royal Tweetums, he's also a native of planet Blanc.

Sylth Vester wears a large suit of cyborg body armor, which covers various injuries inflicted by his previous encounters with Tweetums. Among his known injuries are:

Sylth Vester works for Queen Grannicus in her plot to prevent the Royal Tweetums from reclaiming the throne. Both were defeated in the end.

When Optimatus invaded Blanc, the Loonatics freed Sylth Vester so he could help them find Tweetums. He also helped them in stopping Optimatus and Deuce's plan to rule the universe, although in the end, he was arrested by Tweetums for telling Deuce how to use the scepter. Since he helped the Loonatics save the universe, it indicates that he is also able to do good. He sometimes says "Sufferin Succotash" just like like Sylvester.

Sylth Vester is a fierce warrior, and is practically unstoppable in hand-to-hand combat. 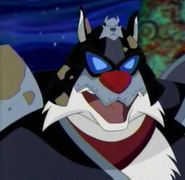 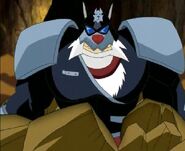 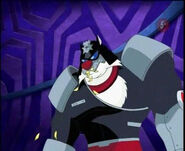