The series was loosely based on the Looney Tunes cartoon characters, with the series described by Warner Bros. as an "action-comedy." Loonatics Unleashed is meant to be a mixture of the Looney Tunes shorts' irreverent style of humor and a modern action animated series, with the characters designed in an anime inspired style.

In the year 2772 (the late 28th century), a meteor strikes the city-planet of Acmetropolis, knocking it off its axis. However, instead of destroying the planet, the impact of the meteor releases supernatural cosmic energies that give some inhabitants superpowers while incapacitating others. 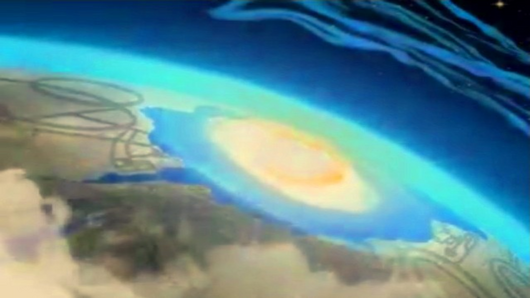 A woman called Zadavia calls upon six of the affected residents to form a team of superheroes. She becomes their supervisor, dispatching them for the purpose of combating any and all threats to Acmetropolis and its citizens.

The team consists of six members: 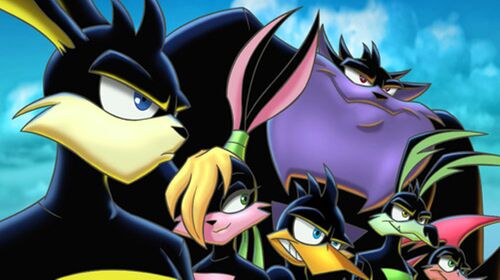 All the members of the team live in a large tower that over sees many buildings and locations in Acmetropolis.

Zadavia, the Loonatics' beautiful yet mysterious supervisor and possible benefactor, usually contacts the Loonatics to inform them of a threat to Acmetropolis and dispatches them to contain it. After the Loonatics have completed their mission, she follows up with congratulations, advice, commentary, and if necessary, reprove a member or members (usually Danger Duck).

Later, in the episode "The Comet Cometh," it is now 2773 and all of Acmetropolis is celebrating the Loonatics on the one-year anniversary of the meteor strike that gave their heroes their powers. Suddenly, the sky is filled with pieces of rock falling from the stars. The Loonatics then are on the move to protect the citizens of Acmetropolis. After all the debris is reduced to rubble an investigation by Tech reveals that another meteor is headed straight for Acmetropolis, only this one is 500 times larger than the one that gave the Loonatics their powers one year prior. Duck comments that he won't like a world where everyone has superpowers, but Lexi tells him that when this meteor hits there will be nobody. Zadavia confirms this and tells the Loonatics that they need to stop the meteor before it strikes the planet. 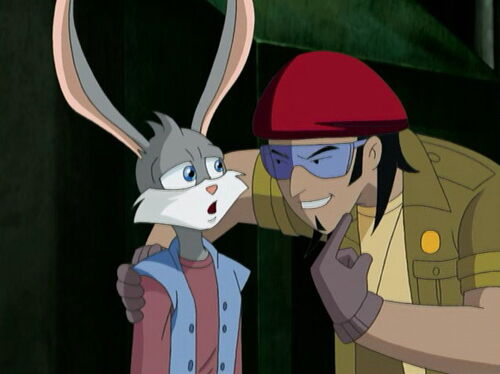 As the team prepares for the intercept mission, we see learn about each Loonatics' life and what they were doing before the meteor struck. Ace was martial arts stunt double. He believed that he could do more than fill the role of an ordinary stunt double but was under tight control of the director. Lexi was a student at Acme University trying out for the cheerleading squad. Though she had extraordinary skill in gymnastics and agility the head cheerleader was jealous of her and didn't want her to get the spot on the team. Duck was a pool boy, angry at the fact most of his day consist of getting dirty diapers out of the pool. Slam was a professional wrestler. Tech was a student at the Acme Tech Institute. Although Tech's need for perfection often caused his inventions to backfire, Tech was still a great inventor. Rev was a delivery boy/inventor. In space, the Loonatics suit up to take out the meteor. When they fail to destroy the meteor, they land on it to plant charges and destroy it from the inside. Though successful, a mysterious character, now known as Optimatus, debuts in the final moments of the episode.

He states that the meteor's striking Acmetropolis in 2772 was not an accidental event but actually a deliberate attempt to destroy Acmetropolis. He then states that he plans to attack the planet for a third time. Despite his last two plans failing. 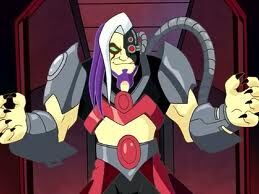 In "Acmegeddon Part I", Massive, Mastermind, Sypher and Weathervane are all placed in transport tubes that neutralize their powers. They are being watched by Duck who talks about how they won't be able to escape. Suddenly, a ball of matter shows up. The ball of matter turns itself into a worm hole which takes Massive, Mastermind, Sypher and Weathervane with it. They are teleported into space with Optimatus. Optimatus says he needs their help in taking down the Loonatics. In return he promises them Acmetropolis. They all agree to his terms. Optimatus then gives them a device he wants them to insert in the Loonatics headquarters.

Back with the Loonatics Duck is still distraught that the villains got away on his watch. Ace reassures him, telling him not to be too hard on himself. Zadavia then appears as a hologram telling them to find the villains before the situation escalates. As the hologram disappears, the Zadavia herself fears that Optimatus was behind this, and that he is coming for her. Ace sends Duck and Rev out to look around. Lexi notices Ace just sent them out so they wouldn't bother him as Ace replies sarcastically, "I have no idea what you’re talking about Lexi". Tech does a search of Acmetropolis and finds Sypher at the zoo. The Loonatics then dispatch to get him.

At the zoo, Sypher has taken all the animals’ natural abilities. With him is Massive, Mastermind and Weathervane who fight the Loonatics. The Loonatics, out matched are defeated and wake up trapped in the underground prison Tech made to hold Mastermind. They are unable to use their powers in the prison and is guarded by Sypher. Duck and Rev then learn it was a wormhole that allowed the villain’s to escape.

At the tower Mastermind disguises herself as Duck so the facial recognition program will allow the villains in the Loonatics headquarters. There, they insert the device Optimatus gave them into the Loonatics motherboard causing it to malfunction. Zadavia finally gets through to warn Duck and Rev before they are ambushed by the villains. Duck and Rev escape and are told by Zadavia to find the others. Rev realizes where the other Loonatics are and rush off to find them. Once they reach the underground prison, Duck distracts Sypher while Rev tries to input the correct password.

Duck makes a mistake and teleports right by Sypher, who steals his powers. Tech then remembers the password and tells Rev, who inputs it releasing the Loonatics. The Loonatics and the villain’s then have a fight which leads to everyone getting out from the underground prison before it collapses. Optimatus, angered by the villain’s failure, takes all of them back via wormhole. Duck follows them wanting his powers back. The remaining Loonatics are then met by Zadavia in person who says she must tell them all something. Ace tells her there was something familiar about Optimatus. Zadavia agrees and says that's because Optimatus is her brother.

We learn that Zadavia and Optimatus were born into the royal family on Planet Freleng, but Optimatus had different plans to use his governmental power. Which nobody found out until the day he announced a council of Freleng that he wanted them to help him take over the universe. When the council refused to back him, his robotic minions took them hostage and Optimatus installed himself as dictator of Freleng. Fearing his pacifistic sister would plot against him, he tried to capture her too, but she easily fought off his robots and slightly less easily Optimatus himself. Ultimately she fled Freleng in a spaceship. Optimatus was caught in the thrust as the ship blasted off, explaining his mildly mangled features. Zadavia then fled to Acmetropolis.

Later in "Acmegeddon Part II", Duck regains his powers. Optimatus then targets the Loonatics, Zadavia and all of Acmetropolis, hoping to destroy them all. The Loonatics and Zadavia successfully save the earth along with the rest of the solar system and send Optimatus to an unknown location in the universe via wormhole. 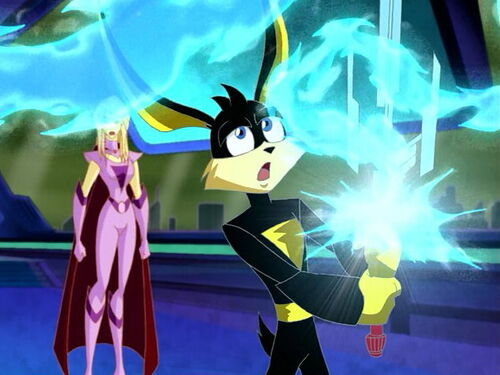 In “Secrets of the Guardian Strike Sword” we learn that Ace’s sword is actually a relic of Freleng. In the same episode we learn of General Deuce. Back on Freleng, Deuce was one of her “most powerful generals,” but when she refused to “place all of Freleng under his command”, he left. Deuce later returned at Acmetropolis looking for the “royal intergalactic quasar train” The last ship to leave during “the fall of Freleng.” The train was laden with cargo “that could make a man king.” After the train was disconnected by Ace, Deuce disappeared into the wormhole created by the train with the engine.

In "The Fall of Blanc, Part I" and "In Search of Tweetums, Part II", Optimatus is free, and he alongside General Deuce; an army general of Freleng and Rupes Oberon; The Music Villain, plan to use Planet Blanc's wormhole generator to take over the universe. The Royal Tweetums contacts the Loonatics for help. Tweetums; the royal king of Planet Blanc evaded capture long enough for the Loonatics to get to the planet and provide help. 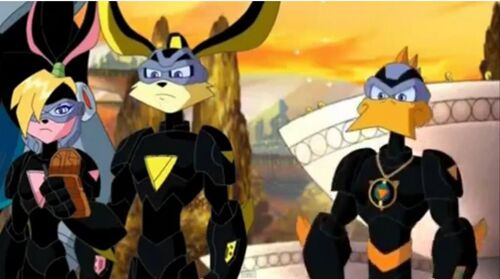 In addition to the Loonatics help, Sylth Vester also lends a hand. After receiving a message containing clues on Tweetums' whereabouts, the Loonatics and Sylth Vester seek out where Tweetums is. Meanwhile, General Deuce and Optimatus begin their plans to conquer the universe. However, Deuce betrays Optimatus, who joins up with Zadavia and the Loonatics. During the final battle between Deuce and Ace, Ace banishes him to another universe. Optimatus, now reformed, leaves with his sister to rule Planet Freleng together. In the end, the Loonatics realize they have graduated from merely protecting Acmetropolis, and are now protectors of the entire universe. The team decides to relocate their headquarters to Planet Blanc, which will allow them to instantly reach any troubled spot anywhere in space. 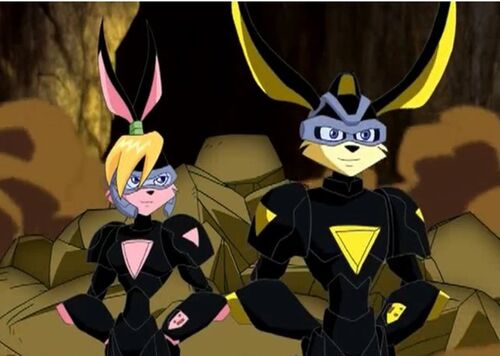