Slam Tasmanian is the tetartagonist of Loonatics Unleashed. He is the group's muscle-bound heavyweight and wears a black and purple uniform, his eyes are red and are originally black before his heroic union. Slam is most likely the Tasmanian She-Devil.

Before gaining his powers, Slam was a professional wrestler named the Twisted Spinner (The Terror From Somewhere).

The speech Slam uses sounds like simple grunting of English, but is implied to be dialogue the audience is not meant to understand. The other Loonatics will sometimes mention what Slam said, effectively translating anything important. In the second season, while still not fluent in the language, he speaks better English.

While Slam is generally brawns over brains, he does show great intelligence when it comes to battle strategies, as seen in I Am Slamacus when he figures out not only how to defeat Gorlop , but how to use Gorlop's abilities to escape. 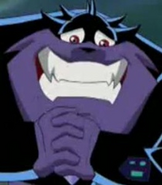