Rupes Oberon (also known as the Keyboard Man) is a villain from planet Freleng who wanted to be a member of Zadavia's Royal Court.

Rupes Oberon presented Zadavia with a national anthem, but was rejected, as planet Freleng already had an anthem. He used Boötes and his band to make Tech build the Cosmic Guitar to drain Zadavia's powers in order to control the universe. They confront him and his mannequin band at Galaxyfest. He successfully kidnapped Zadavia and got away to use some of her powers to free Optimatus who was trapped in a black hole. Rupes also made the same request about the anthem to optimatus.

Both of them locate General Deuce and they invadePlanet Blanc in an attempt to use Blanc's wormhole technology to take over the universe. Rupes was double-crossed by Optimatus who had General Deuce steal the Cosmic Guitar from him and was imprisoned after the Loonatics questioned him about Optimatus' intentions. 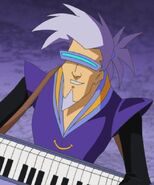 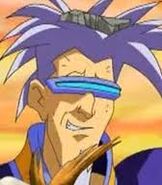