The Royal Tweetums is sweet. He takes great pleasure in tormenting Sylth Vester, and is responsible for multiple injuries inflicted upon the cat. He is highly fond of Danger Duck and is not fully aware that he doesn't like him at first.

His home planet Blanc (a reference to Mel Blanc), was later invaded by Rubes Oberon, Optimatus, and Deuce, and he mysteriously disappears during the attack. His personality is nearly a powerful one. Twice in his first appearance, he says "I'm only thwee and a half parsecs old"; a reference to both Tweety's catchphrase of "I'm only thwee and a half years old" and the apparent use of parsecs as a measurement of time in Star Wars.

Tweetums is self-centered and runs around getting into danger, is very obnoxious, and causes all sorts of pain and suffering for anyone who happens to get caught in the crossfire.

While Tweetums is self-centered, he seems to have taken a liking to Duck, even going as far as to rescue him when he was captured by Sylth Vester.

Tweetums has caused Sylth Vester much pain and suffering over the years. He has pulled his back teeth out, dipped him in molecular acid, gotten him stuck in a particle accelerator, and sucked into a black hole. Because of this, the two do not get along. 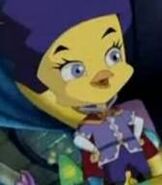