Rev Runner is the sixth main character of Loonatics Unleashed and one of the members of the Loonatics. He is a head-spinningly quick character in more ways than one. He wears a black and red uniform with turquoise eyes. Rev speaks English rather than saying "meep meep".

Before gaining his powers, Rev was a delivery boy for Quick Wrap Sandwich Shack and an inventor who was always late, even while using the rocket skates he created.

Tech is good friends with Rev, despite the rivalry between coyotes and roadrunners. While Rev is not as intelligent as Tech, he is the only one capable of understanding Tech's highly academic speech, and the two are usually seen talking and working on inventions together. Tech sometimes gets annoyed by Rev when he won't stop talking.

Rip is Rev's young and closest brother, although he didn't care for him much on The Family Business. When Rev spends time with his family to build his Robo Amigo, after Rip was possessed by the Bio-Tech Parasite, Rip becomes jealous of Rev's talent as an inventor and superhero while having all of their father's attention. After Rip is possessed by the Bio-Tech Parasite, he acts out his feelings of jealousy towards Rev and takes control of Robo Amigos to destroy Acmetropolis. After Rev gets the parasite off, Rip apologizes for nearly destroying the city, and Rev apologizes for not being a better brother.

Rev's father is Ralph "Pa" Runner and his mother is Harriet "Ma" Runner. He also has a younger brother named Rip Runner. Rev's family members are all introduced in the episode "The Family Business". Ralph "Pa" Runner owns a very successful gadget company and expects Rev to take over the family business rather than continue with his "dead end" job as a superhero.

"Ooh! I wanna try that! I wanna try! I wanna try! Here it goes!" - Weathering Heights
(To Tech) "Really? Maybe it's being done by that same person who's "not" smarter than you." The Heir Up There 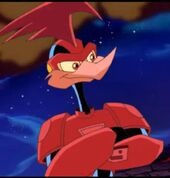 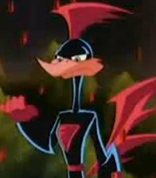 Rev in the oppening sequence of the first season 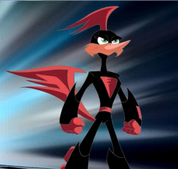 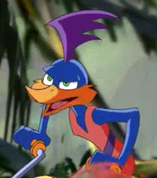 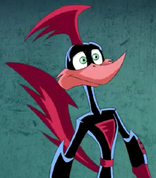