Pinkster Pig is the villainous one.

Pinkster Pig grew up in the same orphanage as Danger Duck. Pinkster suggested that a coin toss determine who would be adopted and Danger Duck won, with Pinkster saying that he didn't give up on his dreams like working as a scientist and police officer.

It wasn't revealed until later that Pinkster was really Stoney and Bugsy's boss, alias Pink the Pug, and was ruining the Loonatics' attempts on purpose. Pinkster also mentioned that he was destined for this life, manipulated Danger Duck into using the two-faced coin, and was later adopted by Stoney and Bugsy.

Ace proves to have already figured Pinkster out by researching the jobs Pinkster claimed to have had. When the Curium 247 - to which Ace was exposed by Pinkster - turned out to be fake, Pinkster ended up defeated.

Duck then had a short speech about how Pinkster could be reformed before he was interrupted by Pinkster knocking him over. In the tradition of his ancestor, Pinkster ended the episode in his own way by talking to the viewers, saying "This ain't over, folks!"

As said above, Pinkster grew up in the same orphanage as Duck. When it came time to adoption, Pinkster suggested the coin toss to determine who would be adopted and Danger Duck won with a two sided coin. When Duck met Pinkster again he tried to get the other Loonatics let him stay. Later in In the Pinkster it was revealed that Pinkster has been causing the Loonatics problems to help out criminals Stoney and Bugsy. After he was exposed and captured Duck talked about how he could be reformed prompting Pinkster to knock him over ending the episode saying "This ain't over, folks!"

When Pinkster's true colors were revealed it was also revealed that he was their boss (whom they adopted from the orphanage he and Duck originally lived), all three were defeated and sent to prison. 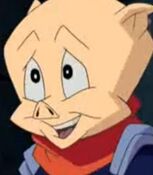