Otto the Odd along with the Ringmaster are partners in crime.

Otto was pretending to be a mere assistant and circus clown but was later revealed to be the brains of the operation behind the Galactic Oddities circus, at least in terms of the technology. He also claimed that the Ringmaster worked for him, though Otto did this whilst betraying his partner, so it a dubious assertion at best. When everyone was turned back to normal, Otto turned Ringmaster into a fearsome creature, crab clawed and tentacled monster, as a final offense in desperation. Alongside Ringmaster, he was sent to prison.

Otto later returned where he had a lair disguised as a space prison with a robot version of the warden. He was collecting people and items for his collection as the best anything in history. He hired Electro J. Fudd into hunting Ace (who Otto considered the Best Action Hero in History) and Otto lured the Loonatics out with a Massive robot. He changed his target to Danger Duck and when Electro caught him, Otto decided to use his laser to freeze them in place. Both Electro and Duck were on the run until Ace appeared. After robot double against robot double, Otto was hit by his own laser.

Otto served at the Ringmaster's side as his partner in crime although he later claimed that he was the mastermind behind everything. He and the Ringmaster were later sent to prison.

Otto later hired Electro J. Fudd from prision to hunt Ace for his collection. When Ace unknowingly proved to be too much for Fudd to capture, he turned attention to Duck. Otto then tried to use a freeze laser to capture Duck and Fudd for his collection as "Best Screw-Up Action Hero" and "Best Hunter of All Time". The two dodged Otto long enough for Ace to use Otto's own laser against him freezing him in place. 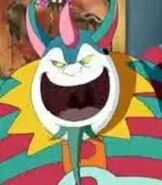