Optimatus is Zadavia's brother. He is a mysterious character who possesses similar, if not exactly the same, powers and abilities as his sister. Optimatus has a cybernetic eye due to an accident on planet Freleng which resulted in him getting caught in the heat of the jet Zadavia escaped Freleng with, for which she claimed to be sorry about.

At the time the Loonatics first season in the year 2772, Optimatus resided on a ruined planetoid which he used as his base of operations during all of his Loonatics appearances (it was not made clear whether this was, in fact, the remains of his futuristic home world of Freleng or just somewhere he set up base after tracking down his sister, however Zadavia states that Frelang is located in an alternate galaxy and the planetoid was located at the edge of the Loonatics' solar system).

He first appears in the final moments of "The Comet Cometh" to state that the meteor's striking Acmetropolis in 2773 was actually a deliberate attempt to destroy Acmetropolis, as was the 500 times smaller first meteor that the episode involves. With both attempts failed, he also states that he plans to attack the planet a third time in the future.

In the two-part season-ending episode "Acmegeddon," Optimatus appears again to fulfill his promise, freeing Massive, Mastermind, Sypher, and Weather Vane to aid his attempt to defeat the Loonatics. He also entices them by claiming that he will allow them to rule Acmetropolis if they succeed. After he made up his mind that the criminals he had freed "failed" him, he revealed his latest plan to destroy Acmetropolis: sucking it up into a wormhole. He then sends the criminals back to Acmetropolis, saying they can still "rule for five minutes". In the end, however, Optimatus and his Optiforce (apparent remnants of robots who served him on his homeworld) are eventually defeated, and he is sucked into one of his own wormholes. Zadavia says he will end up on a dark, cold, deserted part of space and he can then be seen huddling up to a fire, on a small piece of what was once his command center, using the remains of his Optiforce to keep the fire going. He swears he'll get his revenge, but was completely disarmed upon his defeat, making a return next to impossible.

He has appeared in the second season finale thanks to Rupes Oberon using Zadavia's stolen powers on him. Rupes Oberon later locates Optimatus and frees him. Both of them then locate Deuce and invade Blanc in an attempt to use Blanc's wormhole technology to conquer the universe and seek out Tweetums' scepter. He was double-crossed by General Deuce and had to fight alongside the Loonatics, Zadavia, and Sylth Vester. In the end, Optimatus renounces his evil ways and he and Zadavia return to Freleng as its rulers.

As a would be interstellar conqueror, Optimatus is incredibly powerful. Both as a cosmic dictator and as royalty of his home planet. He was the lead scientist amongst a think tank of his worlds greatest intellects who perfected the wormhole technology Freleng had developed. He has a seemingly endless supply of robotic minions armed with advanced weapons technology christened his Optiforce aboard his starship, which also boasts the most powerful wormhole generator ever conceived. On top of that Optimatus also possesses vast atrokinetic powers. Able to hurl meteors from space charged with his cosmological energies or discharge cosmic storms which can disrupt technological systems and animate/reinforce lifeless matter. Like his sister Zadavia, he can also project energized holo-images of himself as a means of communication.

Full of anger and hungry for power, Optimatus sent meteors to hit Acmetropolis and destroy Zadavia. He considers Zadavia the only threat to him and is out to destroy her no matter what. In the last episode, he reformed and returned to planet Freleng with his sister to rule the planet together.

Zadavia is Optimatus' sister. As stated above, Optimatus is power hungry and that quest for power caused him to butt heads with Zadavia on Freleng. When Zadavia left Freleng, Optimatus tried his best to destroy her. He sees Zadavia as a threat to his conquest for power. In the season two finale, he renounced his evil ways and went back to Freleng to rule the planet with Zadavia.

Seeing as how the Loonatics are lead by Zadavia, Optimatus treats them the same as he would treat his sister. He did his best to destroy the Loonatics but was ultimately defeated. 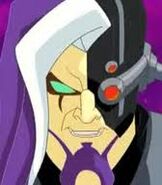