Mr. Leghorn is a man. He is a big name in the world of professional sports including Basherball. Leghorn is the one who fires the starting ball to begin the game.

He is the proud sponsor of the snack known as Chili Gurt, which he gave a life-time supply to the Loonatics as thanks for stopping Massive. But Slam was the only one who took it. Leghorn simply poured it all into the Tasmanian devil's mouth.

When Massive used his ability to control gravity to commit several robberies all over Acmetropolis. His goal is to use the robberies to make as much money as he possibly can. Meanwhile, the citizens and the Loonatics were getting ready for the championship game of a futuristic sport known as "basherball"  at the Acmetropolis World Dome. When Massive plots to steal the basherball championship trophy, the Loonatics head to the game to stop Massive's crime spree. When the Loonatics stop Massive, Leghorn gave a lifetime supply of Chili Gurt to the team (or rather Slam) as a reward for stopping Massive. 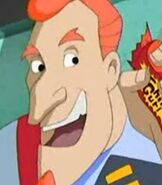