Melvin the Martian is a bad guy.

Melvin comes to blow up Acmetropolis after his spacecraft was hit by a missile that came from Tech's X3000 Automated Weapons System when Rev and Lexi mistake it for a video game. He demanded the planet surrenders or he'll destroy it. After a talk with Duck, Melvin decides to shrink it. When Lexi admitted tampering with Tech's invention, Melvin ordered the Loonatics to hand her over to him in 24 hours or "the planet will be hard to find on any map."

Lexi ended up surrendering to Melvin and the Loonatics get her back using an idea from Rev- to create a Trojan horse. While Lexi faces off against Melvin in a game of Celestial Checkers (while Melvin is secretly having his warships shrink the rest of Acmetropolis), he also attempted to blow up Ace with a Uranium PU-36 Explosive Space Modulator (Marvin used an Aluminum PU-36 Explosive Space Modulator) but got his helmet blown off instead after arguing with him over who'd get it. Ace, Duck, Rev, and Slam rescue Lexi, restore Acmetropolis, and defeat Melvin who escapes with his dog Sergeant Sirius.

Melvin is very similar in appearance to his ancestor Marvin the Martian, although with some slight modification to his visual design.

Melvin had taken a liking to Lexi after seeing that she was the one who destroyed his spacecraft. He then threatened that he would destroy the planet unless she was delivered to him. When she did choose to go with him in space, they played a game of interstellar chess where he used her to shrink parts of Acmetropolis. When Ace and Duck came to the rescue and they all escaped he then sent missiles to Acmetropolis. Lexi used her "Ballistic Bunny Blast" move on the automated weapons system to destroy the missiles and Melvin's ship. 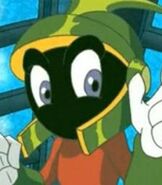