Loonatics on Ice is the first episode of the first season.

On the hottest day of the year, an iceberg drifts toward Acmetropolis from the ocean and pushes inland due to a supernatural force. The iceberg then begins to freeze over Acmetropolis as well as most of the citizens.

In the tower, the Loonatics are oblivious to the devastation befalling the city, with Tech and Rev ordering pizza, Ace meditating, Danger Duck choosing a new name for himself, and Lexi listening to music. It is then that Slam comes back from the city covered in ice that Zadavia appears and informs the Loonatics of the iceberg. Zadavia speculates that the iceberg could be related to the supernatural events that took place after the fall of the 2772 meteor and that they should investigate why the city has suddenly gone into a deep freeze.

The Loonatics then try to solve the problem, ultimately dismissing it as mother nature's doing. Tech introduces the team to his Retrofire Master Blasters; with these tools, the Loonatics attempt to melt the iceberg, which somehow repels the heat of the blasters. They then resort to using Slam's Tornado Maximizer power to melt the ice via chipping and melting with the tremendous friction caused by the rpms. Once the iceberg is melted to the point where the surrounding temperature is normalized, the Loonatics think they have won, but Lexi hears something coming from the inside of the iceberg that definitely does not belong to mother nature.

The remaining ice collapses, revealing that inside the iceberg was a large, dragon-headed Viking ship. From a hatch, a team of robotic vikings called the Techno-Vikings and their leader, Gunnar, emerge and declare their intent to conquer Acmetropolis. A short scuffle follows between Ace and the lead viking which ends in a dual of powers between Ace's laser vision and the viking's ice sword. Tech is able to deduce that the vikings' weapons are charged with a sub-zero hypo-thermal liquid solidification energy that when fired can freeze on contact before the Loonatics become encased in a tomb of ice, leaving the vikings free to storm their way through Acmetropolis.

Duck is soon able to quack himself out of the ice while Slam frees the rest of the team. They lost the vikings in the city, but Zadavia contacts them shortly afterward once again to speculate that the iceberg had slipped through an inter-dimensional portal that opened during the meteor's impact, the vikings having been trapped inside during an icestorm in their own dimension. Zadavia was about to inform the Loonatics of a bigger problem before an icebomb shot from the viking ship destroys the communications terminal. The vikings seemed to have returned to their ship and the Loonatics prepare to take off only to find that the ice had short-circuited their jetpacks, prompting Tech to introduce the Zoomatrixes. A skirmish follows where the Loonatics deplete the ship's ice ammunition then regroup to attack it with a ship of their own. A torpedo strike fails as the viking ship was also flight-worthy, but so is the Loonatics' ship and it quickly takes the other ship down with a salvo of destabilizing gravity disks.

Once on the remains of the ship, the Loonatics realize that most of the vikings are not there, Rev's GPS revealing that they were in fact making their way to the planet's power core. Ace realizes that the fight with the viking ship was all a destraction so Gunnar could freeze Acmetropolis' power core thereby disabling all power and making a new iceage possible. The Loonatics quickly make it to the power core  to find that the vikings had already frozen the apparatus. A fight against the remaining vikings commences while Tech finds a way to reprogram their freezing powers. When Ace kicks Gunnar into the power core, electric arcs connect with the viking helmet Tech had reprogrammed, reviving the power core and disabling all the vikings. Duck discovers a liquefied Tech under the helmet, having been caught in the electric arcs.

With order restored, the Loonatics return to HQ where Zadavia thanks all of them for their heroics, except for Duck, who calls her again to receive his praise only to have Zadavia deny his request for a name change, stating that the name Danger Duck is self-explanatory and easy to remember. Duck finally concedes to his name.

Tech E. Coyote: [Rev got a pizza for Tech and the pizza is frozen solid.] ...now that's cold. [Tech takes a bite out of the pizza] Where'd ya get it, Iceland?
Rev Runner: Actually, no. I just picked it up at the pizza joint downtown, which I must say is abnormally cold for this time of year. But if you really wanted some pizza from Iceland, I could go get some and be back in 4.2 seconds, but of course that's just an estimation because you really can't be too sure about the traffic-
[Tech pushes a piece of pizza in Rev's mouth]
Tech E. Coyote: That was one of those questions that didn't require an answer. [turns to Ace] Hey, Ace?
Ace Bunny: On it, Tech.
[Ace zaps the frozen pizza with his laser vision]
Tech E. Coyote: Extra crispy. Pizza, Duck?
Danger Duck: Are you kidding? I've already had my protein shake. It's vitally important to maintain a superhero physique, because you can't be flabby when you're "The Duckinator"!
Ace Bunny: Yesterday you were calling yourself "Super Duper Duck".
Danger Duck: Yeah well, the name wasn't quite rolling off the tongue. Besides, I need a name that'll fit on the costume.
Ace Bunny: How about, uh... Duck?
Danger Duck: Very funny.
[The door opens and Lexi enters, listening to a music player and dancing.]
Lexi Bunny: [Removing earphones] Tech, did you order more than one pie?
Tech E. Coyote: No, why?
Lexi Bunny: Because Slam is in the house.
[The door opens and Slam is standing there, frozen solid.]
Zadavia: Loonatics, we have a problem.
Ace Bunny: You got that right, Zadavia. I'd say we've got a serious problem.

Ace Bunny: Eh, what's up, Zadavia? Certainly not the temperature.

Zadavia: I don't have to tell you what will happen if the temperature keeps dropping.
Danger Duck: I knew it. We're gonna lose cable again.
Zadavia: OK, maybe I do have to tell you. The entire world could be facing a major ice age.
Ace Bunny: I think we can handle one iceberg.
Zadavia: Acmetropolis is counting on you to take care of it. Zadavia out.
Lexi Bunny: When she goes out, where does she go? The movies?
Ace Bunny: Tech, we might need some toys for this one.
Tech E. Coyote: Uh, excuse me Chief. They're not toys. They're "hand-crafted precision alloy instruments".
Ace Bunny: We'll take those too! But first; the toys.

Ace Bunny: You've outdone yourself, Tech.
Tech E. Coyote: You can say it. I'm a genius.

Gunnar the Conqueror: Let's put this city on ice!

Rev Runner: Would you look at that thing? It's gotta be the biggest iceberg I've ever seen! And believe me, I've seen some doozies before! Do you think we should've put more juice in the blasters? Not that I'm doubting your expertise, Tech. But that is one gigantic -
Ace Bunny: Rev, watch where you're talking!

Danger Duck: [watching Slam melt the iceberg] Glorified zamboni! Chipping ice isn't a superpower. Quacking is a superpower! Observe!
[Duck quacks himself into the ice and gets stuck]
Danger Duck: ...you can stop observing now.

A lift room without Lexi. 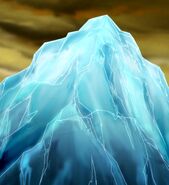 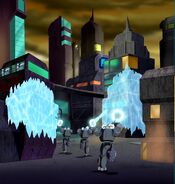