Loonatics Unleashed is an American animated television series produced by Warner Bros. Animation that ran on the Kids' WB for two seasons from 2005 to 2007 in the United States, Teletoon in Canada, Kids Central (now known as Okto) in Singapore, Cartoon Network's Boomerang in Australia, Cartoon Network in the UK, Southeast Asia and Latin America, and XHGC in Mexico. It is still broadcasting on Clan TVE.

The characters in Loonatics Unleashed were designed by Christian Tremblay and Yvon Tremblay, who created and designed SWAT Kats for Hanna-Barbera in 1994 and Mega Babies.

Loonatics Unleashed generated some criticism among various animation fans for its assumed reinterpretation. Some original Looney Tunes fans found the concept, style and tone of Loonatics distasteful. Specifically, detractors believed the idea to be a cheap "extreme" marketing ploy to appeal to a demographic at the expense of the classic Warner Bros. characters. 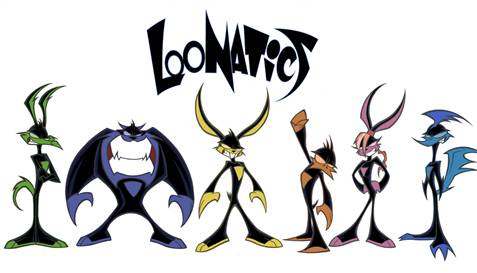 Another issue arose with "Buzz Bunny," the original name of Ace Bunny.  Dutch freelance designer and illustrator Metin Seven had copyrighted a character of the same name. After complaints about the original preproduction character models' appearances, including an Internet petition of protest that was started by 11-year-old Thomas Adams, the producers of the series revised and softened the characters' appearances to make them appear less menacing. All of these responses came before the program had aired. 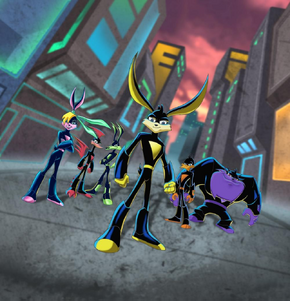 Loonatics Unleashed takes place in 2772. During that time a meteor struck the fictional city-planet of Acmetropolis, knocking it off of its original axis. However, rather than destroying the planet, the impact of the meteor sends out shockwaves that gives off supernatural cosmic energies that give some inhabitants superpowers while incapacitating others in its wake. A beautiful, mysterious and powerful woman called Zadavia (voiced by Candi Milo) calls upon six of the affected residents that live in Acmetropolis and forms a team of superheroes. She becomes their supervisor, dispatching them for the purpose of combating any and all threats to Acmetropolis and its citizens. The newly formed team is known as the Loonatics.

For futher information on the season's intro see, Intro.

In "Family Business", Toby the Pizza Guy's boss, Mr. Bronski, resembled the "down and out" protagonist from the Merrie Melodies short, One Froggy Evening. 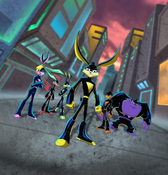