Lexi Bunny is the tritagonist of Loonatics Unleashed and the only female member of the Loonatics. She is an anthropomorphic rabbit. She is Ace's potential love interest.

Before gaining her powers, Lexi was a student at Acmetropolis University who tried to join the school's cheerleading squad. The captain, afraid she was too good, did not accept her. Lexi enjoys playing video games and is implied to be the best of the team at it, and wears a pink uniform. She leads the group alongside Ace Bunny and Danger Duck (on occasion).

In the episode "The Comet Cometh," after a meteor shower, an investigation by Tech reveals that a meteor is headed straight for Acmetropolis, only this one is 500 times larger than the one that gave the Loonatics their powers one year prior. The Loonatics then go into space to stop the meteor before it impacts Acmetropolis.

As the team prepares for the intercept mission, we see learn about each Loonatics' life and what they were doing before the meteor struck. Lexi was a student at Acme University trying out for the cheerleading squad.

Though she had extraordinary skill in gymnastics and agility, the head cheerleader was jealous of her and didn't want her to get the spot on the team.

In "It Came From Outer Space," when Rev and Lexi tamper with Tech's X3000 Automated Weapon System mistaking it for a video game, Melvin the Martian comes to Acmetropolis to destroy it after his spacecraft was hit by a missile from Tech's invention. When Melvin threatens to shrink the planet, Lexi admits she tampered with Tech's invention and Melvin orders that Lexi be handed over to him in 24 Hours or he will shrink the planet. Lexi eventually goes with him but it is revealed that he uses her unknowingly to perform his plan. The Loonatics then board Melvin's ship, rescue Lexi, and stop Melvin.

In "Apocalypso," after landing on the island of Apocalypso, the Loonatics find a colony of beautiful, powerful women called the Apocazons led by Queen Athena. Queen Athena was impressed by Lexi's behavior towards Duck, and invites her to join them in a very special event. When Lexi discovers weapons of mass destruction and workers that have gone missing on the island she gets the other Loonatics and prepares to escape. She then battles with Athena.

Athena then explains that their men had mistreated them so she transformed them into plant-like beings in order to co-exist. She also says that she was only stopping at the island to refuel so they could leave to a less hostile place and would release the workers when she did. Unknown to Duck that the Apocazons were actually peaceful, he had missiles from Tech on the way to the island. Duck and Lexi then use their powers to get enough energy for the Apocazons to blast off with their ship. Duck then "quacks" them both out of there before the missiles hit. Everyone, now safe, returned to their homes.

Lexi Bunny is the second-in-command of the Loonatics. Before getting her powers, Lexi was a student at Acmetropolis University who tried to join the school's cheerleading squad. The captain, afraid she would be overshadowed in terms of skill, did not accept her. Nevertheless, Lexi is the most agile and acrobatic member of the team.

As a member of the Loonatics, Lexi is the team's eavesdropper. Her powers, if not equal to, are almost as powerful as Ace's.

Her relation to Ace, if any, is unclear. She could also be in love with Ace and appears to care deeply about him. This was evidenced by how she reacted to the possibility of him being dead in "Acmegeddon Part II" (she cried, and later hugged him), while ignoring the fact that Rev could also be dead. Aside from that, however, whatever concern she may have for his safety she seems to keep well hidden.

There may be a couple of examples where she showed mild concern, but not something of a deep emotional display, i.e in "A Creep in the Deep", she told Duck off when he failed to save Ace from being captured by Adolpho, and in "The Hunter", she displays emotion in response to Electro J. Fudd capturing Ace.

In the episode "In Search of Tweetums", Lexi was the first one to run to Ace's side after he banished Deuce through a wormhole in the generator area of wormhole central by using the Guardian Strike Sword on the point where Tweetum's scepter was located to power the machine. The effort leaving him exhausted, he subsequently collapsed.

Lexi has shown to be annoyed by Duck's selfish behavior and often brain blasts his tail feathers for insulting her. In "A Creep in the Deep", when attempting to fire a "Brain Blast" underwater, it was heightened to a crude yet powerful psionic explosion that disrupted Adolpho's mind control over the sea creatures with the help of Danger Duck saving Acmetropolis from being sunk. Even though she gets annoyed with him and often snarks at him, she is also shown to become close to Duck overtime, as she comes to expose her soft side, due to the fact that they save each other multiple times and also because they team up more often than any other Loonatics. Duck even calls her "sister" time to time.

Lexi occasionally expresses concern about her looks, the first time being in the pilot episode "Loonatics on Ice" when Zadavia tells them about the freeze Lexi mutters about how wearing a sweater would make her look chubby. Another example is in "Stop the World, I Want to Get Off" when she asked if Tech could find a way of reverting their weight to normal without making them look bloated.

A further example is in The World is My Circus after being mutated by the DNA scrambler of Ringmaster and Otto she says that they can't keep fighting and the Pepe Le Pew look is not her. This is an ironic statement as she along with all the other Loonatics would eventually encounter Pierre Le Pew (the evil human parody of Pepe Le Pew) who observed her placing a Pterosaur back into the Acmetropolis Zoo (it was implied that he released the animals to be able to recruit Slam to his illegal fights arena) and Pierre attempted to flirt with/hit on her by complimenting her looks. Lexi however was predictably repulsed by Pierre's stench and creepy mannerisms.

"Come on, you overload trash can! Show me what'cha got!" - "Loonatics On Ice"

She wears a black suit with pink schemes, a green ribbon tied up her ears, light green eyes, and a golden blonde hair and eyebrows.

Whenever she wasn't wearing a bodysuit, her fur is ivory and white without any visible chest pattern unlike Lola bunny, light blue eyes, and aery light blonde hair. 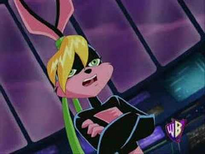 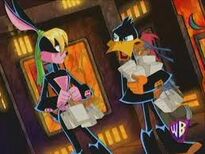 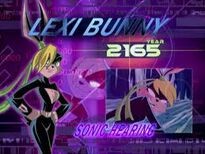 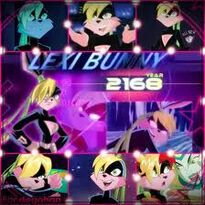 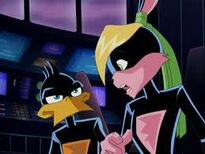 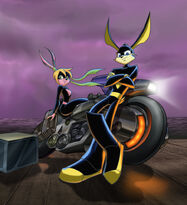 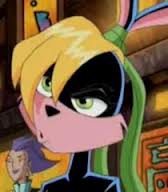 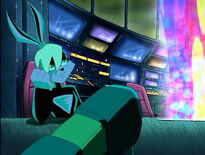 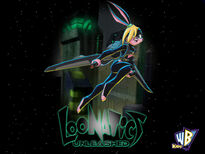 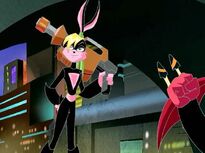 Lexi breaking down about Ace's and Rev's seemingly death 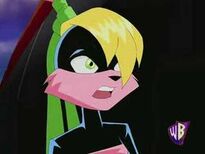 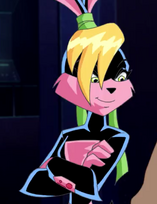 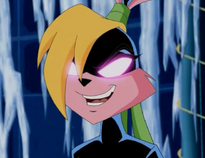 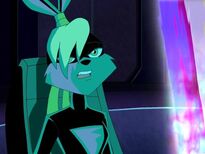 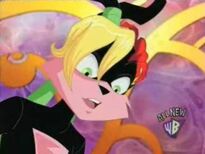 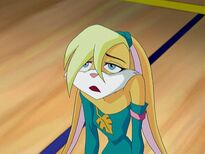 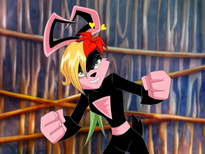 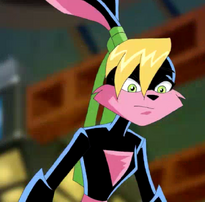 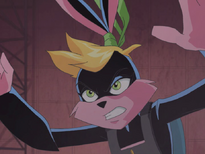 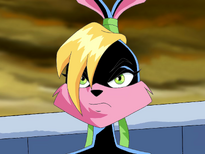 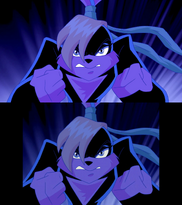 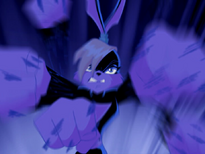 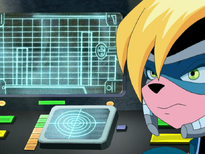