It Came From Outer Space

It Came From Outer Space is the eighth episode of the second season.

Rev sneaks around Tech’s lab while Tech is working on an invention. Rev makes his way to the molecular modifier and increases the size of his birdseed for his sandwich when Tech catches him, letting Rev know that his inventions are not to be played with. When Tech leaves to work on something else Rev promises he won’t lay a hand on another thing. When Tech is completely gone he then uses his beak to activate several commands on the keyboard. Thinking one thing is a video game he proceeds to play it when Lexi walks in excited to play as well. Lexi then uses her skills at the video game which she calls her “ballistic bunny blast” to destroy an asteroid cluster on screen.

Tech walks in and tells them that is no video game; it is his Automated Weapon System and they blasted things in space. Rev reassures Lexi that with the millions of inhabited planets, the chance she hit something important is slim. In space, Melvin the Martian’s spacecraft is hit by one of the missiles launched by Tech’s invention. Melvin says he should congratulate whoever did this by destroying Acmetropolis.

At HQ onscreen, Melvin the Martian is telling the Loonatics all the things he lost from the missile attack. He claims he has enough power to destroy Acmetropolis but Duck doesn’t believe him, prompting Melvin to destroy three stars. Duck claims those where easy shots and tells him to blow up the sun. Ace then stops Duck from talking by grabbing his beak. Melvin then says that he won’t destroy the planet he will only shrink Acmetropolis to add to his collection. Lexi admits she tampered with Tech's invention and caused all the damage.

Melvin says that she must be a good game player and comments that he has tried to play complex games with his robotic dog. The only problem is the dog CPU is not strong enough. Lexi relates to that. Melvin then decides he won’t destroy or shrink the planet; he will only take Lexi to join him in his interstellar checkers game. Ace defensively says that Lexi isn’t going anywhere while Duck tries to talk Ace into letting her go. Claiming it will improve her small talk. Melvin orders that Lexi be handed over to him in 24 Hours or Acmetropolis will to be "hard to find on any map."

Tech says that stopping the invasion will be hard because Martian civilization is too advanced. While Ace and the others prepare for a war, Duck talks to Lexi in hope that he will convince her to leave with Melvin. When the attack begins, Tech puts up the shields so HQ won’t shrink like the rest of Acmetropolis, but the shield will only last for so long. While deciding what they should do, everyone falls asleep at the table.

When morning comes around, the attack has stopped. Duck comments that Melvin knew what he was getting into when messing with them. Then they start to notice that Lexi is missing. The find a holographic note that explains why she had to do it, and that she will miss everyone. Then blows a kiss goodbye and the message ends. Ace still wonders why she left, suddenly the message comes back and Lexi thanks Duck for the advice on leaving. Saying that it is fairer to sacrifice one for the lives of many. Everyone is now mad at Duck who then says that he was taken out of context. The Loonatics then prepare to get Lexi back.

The Loonatics, except Tech, use a Trojan horse scheme to sneak aboard Melvin’s spacecraft and rescue Lexi. On Melvin’s spacecraft, he and Lexi play interstellar checkers by flying on hover boards and shrinking the chess pieces. Lexi notices the others getting out of the horse and distracts Melvin by starting another match. At Acmetropolis, Tech informs the others that Melvin lied, and now the attack is back on. Ace notices a pattern in how their game is being played and how the city is being shrunk. He tells Tech to put shields up at locations parallel to the chess board while a move is being made. They then learn that the chess board and every move affects Acmetropiolis.

When Melvin leaves, Ace and Duck go down to get Lexi who still won’t leave, wanting to keep her promise. Ace tells her that she has again inadvertently caused trouble, prompting Duck to say, “Old habits die hard”. Everyone then proceeds to leave the ship. Ace defends everyone on their way out and comes face to face with Melvin who attempts to pass a lit TNT stick to him. Using methods similar to his ancestor Bugs Bunny, Ace outsmarts Melvin and blows him up. They take one of his own ships back to Acmetropolis to get away.

Melvin, insulted by his failure, sends missiles to Acmetropolis. Lexi then uses her “ballistic bunny blast” move on the automated weapons system to stop the missiles Melvin’s sending. Melvin then wonders why the world hasn’t been destroyed yet when Lexi sends a missile to his ship that blows it up.

Back on Earth, Rev promises not to mess with Tech's again only to get distracted by a red button. Tech warns him not to push it, but he does so anyway: however, a cage falls and traps Rev, making him learn his lesson. Melvin, now reduced to a chariot as a means of transportation, admits that he should have left more stars up in the sky so that he could see better.

Melvin: "Where's the kaboom?! There was supposed to be a world shattering kaboom!" 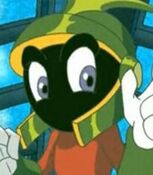