Gunnar the Conqueror is the leader of a band of mutant techno-vikings.

Gunnar, along with is band of robotic vikings were frozen in an iceberg in their own dimension but were released by the meteor that struck Acmetropolis. While on Acmetropolis, they attempted to freeze the world to make it easier to take over, starting with Acmetropolis' planetary power generator. The Loonatics fought him and the other vikings in the city. He was deactivated as well as his other minions when Ace defeated him at the planetary power core, restoring all of the power in the city. 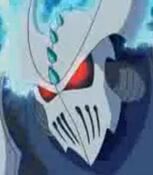