Gorlop is a wrestler, who is from a planet named after the character he's based on. Gorlop initially appears to be a small, only a few inches-tall child, but he can grow when using his ability to consume energy, although he shrinks when expending it.

Gorlop fought Slam Tasmanian on Pierre Le Pew's command in I Am Slamacus. The Loonatics fed him enough energy to destroy a force field and defeated him. Afterwards, he was mad at Pierre and was reportedly returned to his home planet. Gorlop did not seem to have ill-intent, but rather was simply used by Pierre.

He is similar to the Nerdlucks from "Space Jam". Both start out as small innocent looking aliens who become champions by being "Big" and start taking orders from there managers. At the end they turn against there boss and redeem themselves. 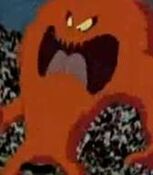