General Deuce is a former general of planet Freleng and the main villain in the second season of Loonatics Unleashed.

General Deuce was once one of Freleng's most powerful generals until Zadavia refused to let him put the entire planet under his command in his quest for glory and stripped him of his position causing Deuce to angrily leave. When Optimatus' uprising happened on the planet, Deuce and his army were nowhere to be seen. In Secrets of the Guardian Strike Sword, working with Ophiuchus Sam, Deuce resurfaced to capture the train containing his robot army by duping Ace into thinking he is on the same side as him. Deuce planned to reawaken his robot army to conquer the galaxy. After the train was disconnected by Ace, Deuce disappeared into the wormhole with the engine.

Later in The Fall of Blanc, Part I, Rupes Oberon and Optimatus locate Deuce; the three Frelengians invade Planet Blanc in an attempt to use Blanc's wormhole technology to conquer the universe after freeing him from the wormhole. He had General Deuce steal Rupes Oberon's Cosmic Guitar and sent him to awaken his robot army again. After this, Deuce betrays Optimatus and keeps Tweetums' scepter (which was obtained by holding Tweetums hostage with a blaster) along with Optimatus' sword to himself (Zadavia had retrieved the Cosmic Guitar while being held prisoner), which results in Optimatus joining the Loonatics in the fight against Deuce.

When Deuce retrieves the scepter, and an amulet which makes the scepter work (Danger Duck has this), he makes his way to the center of planet Blanc with Ace hot in his trail; the two have a sword duel, which results in Ace tricking Deuce into a wormhole blast where he is sent to an unknown location. 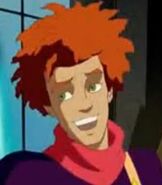