Electro J. Fudd is a hunter. He wears a large, high-tech suit and carries an assortment of hunting weapons. All of Electro J. Fudd's ancestors were killed by some type of animal.

Electro was hired by Otto the Odd to capture Ace Bunny with terrible results and also getting Danger Duck accidentally in one of his traps. Later on, he changed his target to Danger Duck and used a net that negates Duck's powers. Electro persuaded him that Duck is the "Greatest Action Hero in History" and the two went to Otto's lair. When Otto decided to freeze Electro and Duck together, both of them had to work together to escape Otto. Once Otto was defeated, Electro was arrested.

Electro worked with Otto to catch Ace for his collection, but after multiple failures he charges targets and goes after Duck. When trying to deliver Duck, Otto tries to add Electro to his collection as well. Electro and Duck then work together to escape until Ace shows up.

Electro, after failing to capture Ace, then captures Duck, mistaking his continued interference in Fudd's hunt as the sign of a formidable combatant. The two were forced to work together when Otto decides to add them both to his collection. 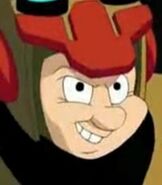