Danger Duck (usually referred to as just Duck) is the deuteragonist of Loonatics Unleashed. He is the spotlight hungry, egotistical member, of the Loonatics. He wears a black and orange uniform, a pair of blue eyes, and a small mohawk.

In the episode "The Comet Cometh", the episode showed that before Duck became a Loonatic, he was a pool boy who was angry at the fact that most of his work consisted of getting dirty diapers out of the pool.

In "A Creep in the Deep", Duck developed a new way to use his powers. Dubbing the power "Aqua Dense", Duck used it single handedly to propel a boat out of a whirlpool and reverse the flow of another whirlpool with help from Lexi Bunny, showing a worth skill and capacitance, even if he's not a leader.

In “Cape Duck”, when one of Tech's weapons goes haywire causing Duck to take out Sagittarius Stomper, he vows to revenge on Duck. The citizens consider Duck as the one who did it which make the others jealous. Meanwhile, Dr. Dare is released from his statue prison after being hit by Tech's invention and steals the Shield of Perseus. When Tech is finally given credit, he, along with Duck, are made targets by the Stomper, who is somehow able to drop heavy objects on them while still in jail. It is learned by Ace that the Stomper’s mom wears a bionic suit of her son and she impersonates him when he goes to jail. It is also assumed that she breaks him out of jail or vice versa. The two are then both sent to the Acmetropolis Prison.

In the episode "In the Pinkster", Duck is revealed as the second Loonatic (after Tech E. Coyote) to personally know a villain, as his best friend Pinkster Pig became one much to Duck's horror. Pinkster was one whom Duck could be considered having a "brotherly love" for, as he begged Ace to let him join. Scolding the news reporter for calling Pinkster a helping failure and when it was the night before the Curium, when speaking to Ace and the rest, he admitted that, despite Pinkster's clumsiness, maybe there was something he could do that they hadn't thought of. It was revealed in this episode that Duck grew up in an orphanage with Pinkster and was adopted by a human couple as a result of a rigged coin toss, with Duck being adopted first because of his lucky two-headed coin.

Duck longs to one day lead the Loonatics, though he does seem to tolerate Ace's leadership. Before gaining his powers, Duck worked as a swimming pool cleaner, and true to form, he dreamed of becoming a lifeguard.

Duck is usually shown up by other characters or angering them with his antics. He is very boastful and has a habit of attempting to re-invent himself (such as requesting name changes for himself, or attempting to add a cape to his uniform). He can also be extremely opportunistic, once trying to be Slam Tasmanian's wrestling manager simply for profit, then haggling with Slam over how much each of them should get (with the preference that Duck receive 90% and Slam 10%). Of all the characters, he seems to be used most often as comic relief, despite or perhaps due to his arrogant personality. This appears to be mostly bluster, as in truly dire circumstances he sometimes lets a more heroic personality show through.

Danger Duck, even though he doesn't prove it sometimes, is one of the strongest members of the Loonatics, since his powers evolve with time. He also possesses the most destructive potential out of the entire team since his "eggs" are unpredictable. He is sometimes hinted to be somewhat of a co-leader of the group since he gives orders from time to time that even Ace and Lexi will follow without question. Overtime, he also becomes very close to his comrades, especially to Lexi whom he sometimes calls "sister" and Ace who occasionally sees Duck as a brother-figure.

Duck one day hopes to become the leader of the Loonatics. Because of this, he sometimes tries to take over the teams missions and prove that he's leadership material. While him and Ace always don't see eye to eye, Duck does have good ideas and the team has been known to have Duck lead them on more than one occasion. Although Ace and Duck don't always agree, the two occasionally see each other as brother-figures.

Duck is shown to be egotistical and snarky to Lexi as she often snarks at his egotism and misfortunes and she has shown to be annoyed with him and often brain blasts his tail feathers when he insults her. As said above Duck has become close to Lexi. She is also shown to become close to Duck overtime, as she comes to expose her soft side, due to the fact that they save each other multiple times and also because they team up more often than any other Loonatics.

Duck is known to criticize Tech's inventions, much to the displeasure of Tech. In "The Cloak of Black Velvet", the two made a bet that if Duck went a week without technology, Tech would pay for a costume he had been been trying to order. However, Duck loses the bet when he used his phone to break Tech out of Black Velvet's mind control. When Duck and Tech were being chased by the Stomper in the sewers and Tech was captured, Duck unselfishly rushed in to save Tech. Although Duck messes with Tech a lot, he shows that he cares for him and respects his inventions.

Rev and Duck worked together when trying to find out what caused the four villains from previous episodes (Massive, Weathervane, Mastermind and Sypher) to disappear in the episode, "Acmegeddon". Other than that, Duck occasionally criticizes Rev although they do get along.

Slam and Duck generally get along, although Duck acts like a parental or older brother figure to Slam, occasionally reprimanding him on his table and eating manners. In "I Am Slamacus", Duck declares himself as Slam's manager to Pierre Le Pew only so he could get a cut in the amount of money Slam wins.

Duck grew up in an orphanage with his best friend Pinkster and was adopted by a human couple after a coin toss. However, it's discovered that he cheated by using his lucky two-headed coin to win. He reveals this as his fourth darkest secret, which caused him two nightmares. To make it up to Pinkster, after hearing about his misfortune afterwards, he begs Ace to let him help them capture Stoney and Bugsy, which the leader reluctantly allows. Despite how clumsy Pinkster was, which lead to failure each time, Duck continues to support him. He is heavily shocked though when he learns that Pinkster was working with Stoney and Bugsy the entire time, acting as a spy. Even so, Duck believed that there was still some good in him.

"Aah! My brain is melting! There's a whole family of them! I'm checking into a hotel."- The Family Business

"Ooh, scary clouds. What, you going to stop us from getting a tan? *YUUH--Maybe stop us from breathing!" - Weathering Heights

"Duck overboard!" - A Creep in The Deep

"You know... I am pretty tasty!" - Going Underground

"Just put me out of my misery!" (The meteor hits) "I was kidding, I was kidding! *screams*" - The Comet Cometh

"Our secret weapon against a cookie attack. Slam, you're despicable." - The Hunter 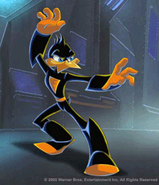 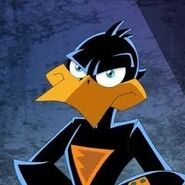