Apocalypso is the ninth episode of the second season.

At the Loonatics Tower, Duck shows everyone a commercial he stars in that showcases an island resort. Ace, relaxing comments on Duck and his commercial. Suddenly Lexi walks in mad at Ace for leaving her to handle all the work while the others sit around. Ace then says that he really isn't cut out for all the business behind the team.

Duck then tries to calm Lexi down by advertising the island resort to her. She decides that it would be a good idea to go because they haven't had a lot of time off. Ace then suggest that the whole team should go, much to Lexi's displeasure.

While flying to the island, Ace talks to Tech and Rev who decided to stay at home. The two then argue over who should be in charge until Tech tackles Rev and Ace says their first duty can be to figure that out. Suddenly the ship is taken down by a huge vine that causes the ship to tackle the island. Damaging the ship .Landing on the island of Apocalypso, the Loonatics find a colony of beautiful, powerful women called the Apocazons led by Queen Athena. Duck tries to make his move on Athena but she ignores him and the others; making her way to Lexi.

Queen Athena was impressed by Lexi's behavior towards Duck, and invites her to join them in a very special event while Queen Athena takes care of the men. Inside of the queen's city she tells Lexi about a special type of nectar that allows plant control. Lexi quickly masters the technique and is excited to show Ace. Athena then says that the men are being taken care of.

The Apocazons prepare a huge meal for Ace, Duck, and Slam. Slam then eats the entire dinner table and loses conscious after a plant knocks him out. Ace then tries to stop Duck from eating, noticing that Slam would never pass up food for a nap. He then takes Duck to figure out what's going on. The two discover bulldozers, the same ones that the construction workers had when renovating the island. Then, out of nowhere several plants attack the Ace and Duck. The two fend them off; making their way to the ship where the plants have them pinned down at.

Meanwhile Athena shows Lexi their nectar supply and offers her a chance to join them. Claiming that they could use someone with her talents. The conversation is then interrupted when Athena gets news and leaves Lexi. Ace then gets an idea on how he can get Lexi and Slam back unnoticed. The two then cross dress making their way for "chick central".

Lexi does some "snooping" inside of Athena's city and discovers weapons of mass destruction, the missing workers, and Slam. Outside, Ace and Duck's disguises fail and they, too, are captured. Lexi frees them all and explains that they need to destroy their power supply (the nectar) and get off the island. They split up: Duck and Slam take the workers to the ship while Ace and Lexi destroy the nectar. On the way, Duck sends a message to Tech ordering a missile launch for the island. Ace and Lexi run into Athena and her Apocazons. Athena then calls Lexi a traitor for dismissing and declining her offer. Lexi then says she won't leave her friends to the same fate as the workers. The two then battle. Ace uses the guardian strike sword to destroy the containers holding the nectar and mixing it in the water.

Athena then explains that her men mistreated them so they left their home planet. Lexi suspects that their men no longer exist, but Athena claims that they do exist "all around them". Apparently, they evolved into plant like beings so they can co-exist. She also says that she was only stopping at the island to refuel so they could leave a less hostile place and would release the workers when she did.

With the missiles on the way to the island, Duck uses his "aqua dense" powers to suck the water out of the nectar. Lexi then uses her new powers to get the nectar into a state to be used. Lexi falls down, tired, and Duck "quacks" them both out of there before the missiles hit. With everyone now safe and returning to their home, Athena says she’s sorry for what she did and is disappointed that Lexi could not join them. Lexi then remarks that the bad guy isn't always obvious, aiming that at Duck who was willing to bulldoze someone's home for money. The team then returns back home.

[Ace is talking to Tech via monitor]

Ace: Eh, sounds great. Your first job is to figure out who's in charge.

[After Duck falls backwards after running into construction equipment]

Ace: What's that?
Duck: If it's round, and rolling around, it's probably my head.

[On the way back to Acmetropolis]

Ace: Here's your clothes back Lex.
Lexi: Thanks...Wait a minute, where's my pink pants suit? Duck...
Duck: Oh-um, you wanted that back? 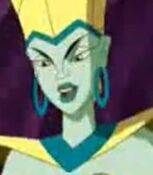